The right way to hold a guitar pick

While I might get some flak from the traditional guitar teachers out there, there’s really no right or wrong way to hold a pick. Playing the guitar is, after all, more art than science.

Don’t get me wrong though. There are commonalities in the way successful guitarists hold their picks.

And there are definitely problematic positions. If the pick often comes flying out of your hand when you’re playing, you probably already know you’re holding the pick wrong.

So let’s first discuss what not to do, and why.

There are three main pain points when holding a pick:

Problem: not holding enough of the pick. That is, finger placement more towards the flat back edge of the pick, rather than the pointed tip. Too hard of a strum in this position will send the pick flying into the eyes of your adoring, unsuspecting fans. Agggghhh!!

Problem: holding the pick in your fingertips. Since your fingertips are fleshy, the pick will tend to travel quite a bit as you play. The general result is sloppy mechanics and a pick that gets lost and slips through your fingers.

Problem: holding the pick with three or more fingers. Some guitarists can and have gotten away with this. And to them I say: good for you! But it definitely depends on the style of music being played, the size and material of the pick, the size of the hands, and so on. This isn’t the right position for most guitarists.

Bah, enough with all this negativity! Let’s figure out how to hold the dang thing.

There are as many good ways to hold a pick as there are guitarists. But successful guitarists do tend to share common picking techniques.

First, your goal is to find a hand position that gives a feeling of stability and control with the pick.

To do this, hold the pick with your thumb and index finger. Generally, your pick should rest on the outer edge of the index finger, next to the fingernail, with the point of the pick extending a just a short ways past the nail.

Press the pick against your finger with your thumb. Your index finger’s nail is strong enough to resist the force of your thumb, and so you have great support for your pick as you play.

The exact placement on the outside edge of your index finger is debatable, and a matter of personal comfort.

Passages heavy on strumming will lead to a more “closed” picking position, with the fingers curled in against the palm. This prevents your fingers from accidentally dragging or snagging against the strings by accident.

On the other hand, a guitarist playing a lead passage might want to hold the pick with only the index finger and thumb, with the remaining fingers fanned out and away. This position can give a much more precise feel and enable greater picking articulation

Well, sorry, there is no single perfect form.

Instead, there are many different forms that can work well depending on the content of the song, your personal playing style, your preferences in guitar picks, and what feels most comfortable when you play.

For example, rockabilly, country or bluegrass guitarists might opt for a hybrid picking style. The way you hold your pick can change within the song itself. A song may have sections that transition from tapping to conventional picking, then to strumming, fingerpicking, and back again.

In time, it becomes natural to move your hands between the positions, and do it all without thinking — and without dropping the pick.

Head over to our Fundamentals collection for more resources on how to hold a pick. Here’s a few of our favorites: 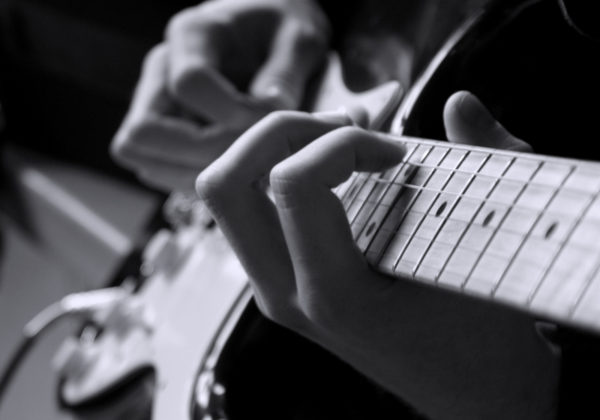 How to hold an electric guitar

If you're like me, you can't wait to grab your guitar and start playing. And, especially when you're a beginner,…

The Internet is a big place. You can help us find great new content! Submit your story today.

Never miss a thing! Sign up for our newsletter to stay updated.

AxeHunter is a curated resource for guitarists.